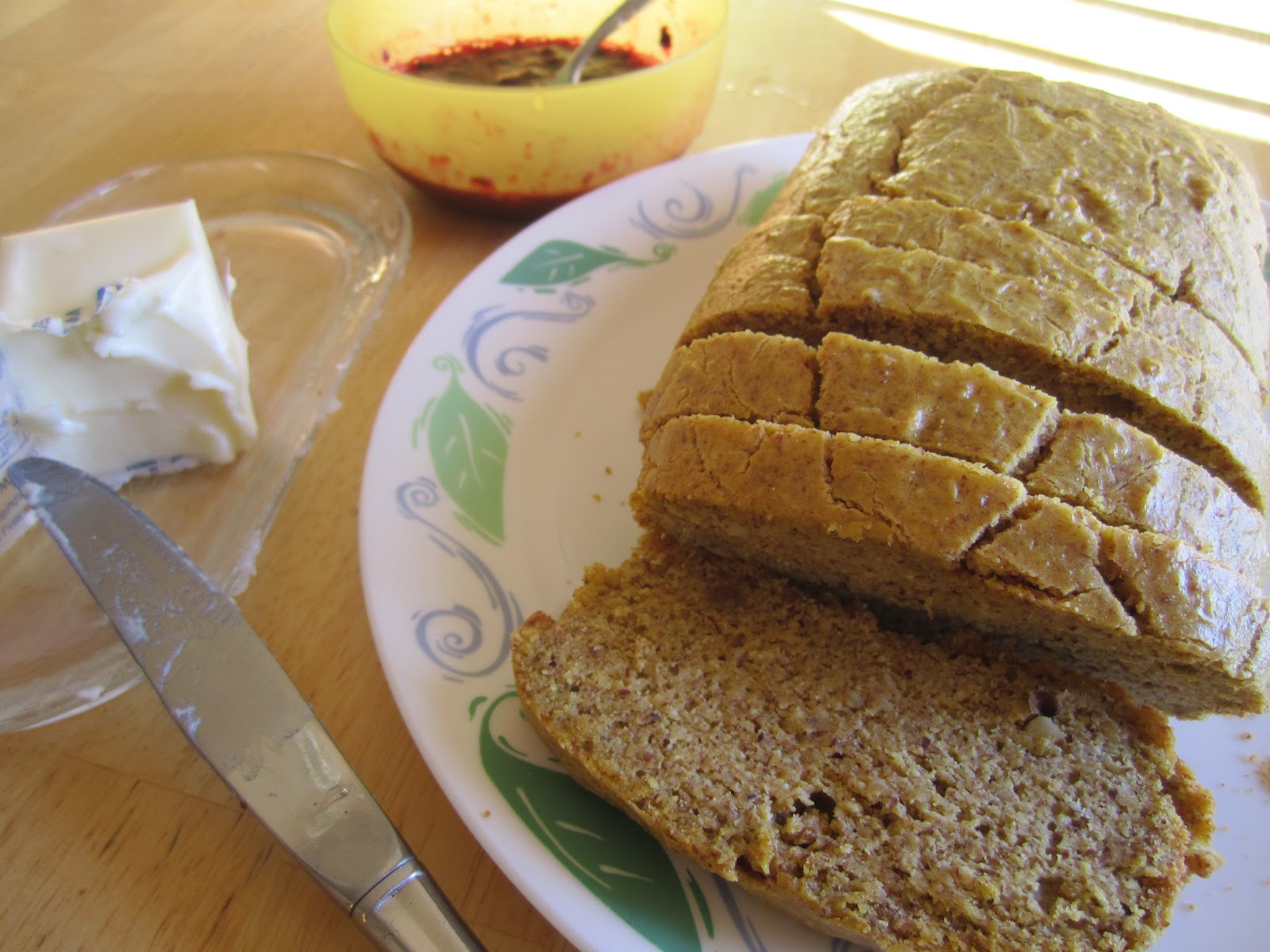 Even though I’ve been gluten-free for years and have reaped the many benefits by cutting out the gut-damaging molecule, I still like a comforting ol’ piece of toast now and again.  But I’m not a big fan of the store-bought loaves since they happen to be packed with a bunch of unsavory characters trying to take the place of fluffy, gooey wheat flour.  Corn starch, cane sugar, dextrose, sunflower oil and canola oil are just a few of those ingredients our body doesn’t much care for either.  And to be clear, just because something is gluten-free does not necessarily mean it’s healthy.  There still might be a lot of sugar and other high-carbohydrate blood-spiking ingredients.  So what’s a girl to do when nothing else will do but a piece of bread with a slab of almond butter?  Make paleo bread, of course!

This recipe is ever-so-slightly adapted from Fluffy Almond Butter Bread from Good Morning Paleo by Jane Barthelemy.  Hats off to this woman who showed me that bread doesn’t need a speck of flour or grain in it to be awesome–for me and my very young daughter, Coco (now 8).  She asked for thirds!  I haven’t even let my hubby try this yet or I know there won’t be any left for dinner tonight.  What I love about this bread so much is that it contains almond butter which is extremely high in Tryptophan, a precursor to Serotonin, the feel good chemical in the body.  Eventually  Serotonin even becomes Melatonin, our get good “shut eye” chemical.  Following this train, it’s a no-brainer that this is an excellent night-time snack.

The other amazing feat about making this paleo bread is how few ingredients are needed.  My previous vision of making bread includes me with an apron (which I never wear), flour dust all over the place (especially strategically placed on my nose so husband can see how hard at work I’ve been), flour on the floor, cupboard and ever crevice in between, lots and lots of kneeding, and above all endless time waiting for the dough to rise and then cook.  Well, scrap that!  This Fluffy Almond Butter Bread couldn’t be easier.  Just 5 ingredients and little of your precious time.  You might even want to whip up a loaf before you child gets home from school–warm and comforting and brimming full of love.

There’s just something so universal about our love of bread and sandwiches.  Nowadays, because I’m mostly Paleo, I think of the two slices as vehicles for the healthy stuff that comes between them.  Really, conventional bread doesn’t offer much that you can’t get in a better form from vegetables, nuts and seeds–yes, we’re even talking about those loaves that have been “fortified” with B Vitamins.  What you are getting is a fair amount of carbohydrates with the accompanying sugar which doesn’t bode well for stabilizing blood sugar.  However, if you’re going to occasionally get the store-bought gluten-free variety, try going “open-face”.  You’ll be cutting back on half the carbs that way.

I could not believe how easy this paleo bread recipe was. I've only altered a few ingredients from Fluffy Almond Butter Bread in Good Morning Paleo by Jane Barthelemy.