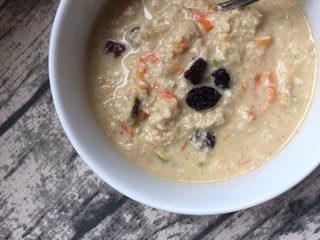 I was lucky to have two sets of grandparents around while I grew up on our farm in Southern Alberta.  The ones that lived on the farm with us were named “Grandma and Grandpa Farm” and it’s not a big stretch to understand that the ones who lived in town were called “Grandma and Grandpa Town”.  To this day that’s how I refer to them  I thought you’d better know about that little family quirk before I start talking about my Grandma Farm’s fantastic rice pudding or my Grandma Town’s amazing Blueberry Muffins (that’s a recipe I must let you in on in the future) and you think to yourself, “my, that’s an unusual name, and what are the odds of a surname Town and Farm happening in one family?”

So back to Grandma Farm’s rice pudding.  Southern Alberta can be miserable in the winter and living out on the farm there were plenty of times that my brother, sister and I were snowed in.  Well, of course we’d bundle up, play on the snowdrifts, then head into Grandparents house (a 15 second walk away) for some freshly made buns  Obviously gluten free wasn’t a word that was even known back 30 or more years ago, much less paleo so bread was bread back then and it was gloriously white and fluffy.  Sorry, no recipe for those today.  But the other scrumptious treat she made for us was the nummiest rice pudding that no one has ever been able to recreate or beat.  Man, did that simple little bowl of goodness warm me up right down the tips of my frozen little toes.

With snow coming a little earlier this year in the Okanagan, I started thinking about simple, healthy and delicious recipes I could make my daughter and Grandma Farm’s rice pudding instantly came to mind.  Now here’s the big elephant in the room–how can you make paleo friendly rice pudding when you can’t use rice (although Russ Crandall, author of Paleo Take Out makes a pretty good argument to keep it in.)  If you’ve read some of my other posts on the friendly little veggie that could…you know how versatile cauliflower can be.  It can even be “riced” in a food processor to mimic the texture of rice.

With riced-cauliflower and a little imagination, you’ve suddenly created a rice pudding dish that doesn’t go overboard loading your system with blood-spiking glucose.  Plus cauliflower has an incredible array of health benefits making it one of my top ten veggies to absolutely be in everyone’s diet.

This cauli “rice” pudding was adapted from Jane Barthelemy’s recipe of the same name in Good Morning Paleo.  I go a little crazy with the spices because I love perfumery and can’t help myself.  It just gives the pudding a lot of zip.  And since I’m a Culinary Nutrition Expert I simply cannot let an opportunity go by to add a high-fiber fruit and vegetable to the mix as well as a big tablespoon of brain healthy coconut oil.  So now this rice pudding has gone from a desert to a hearty breakfast for your family.  Just make sure you add some protein like a few boiled eggs to go along with it.